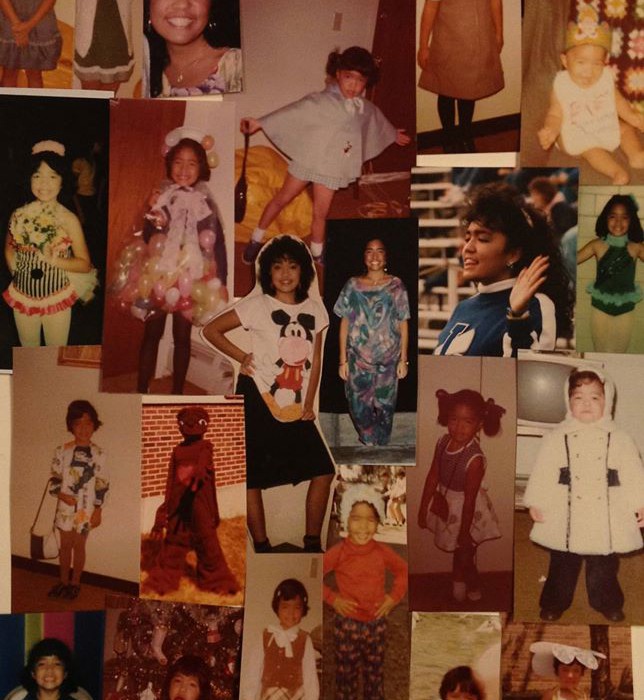 “We all need someone to look at us.
We can be divided into four categories according to the kind of look we wish to live under…
the fourth category, the rarest, is the category of people who live
in the imaginary eyes of those who are not present. They are the dreamers.”
~ Milan Kundera, The Unbearable Lightness of Being, 1984. 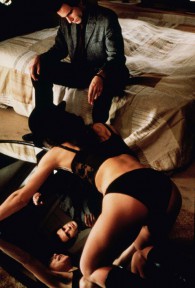 Above ~ a still of Sabina and Tomas, from Philip Kaufman’s 1988 film of Kundera’s The Unbearable Lightness of Being.

Today I turn 44… 44 years of being dressed, dressing one’s self and dressing others ~ an amazingly  44 years of thinking about how we perceive our selves, and our bodies, as we look in the mirror; and how we think we seem to others, as they see us from afar. Those 44 years for me have been ones where at times I felt rapturous and beautiful, but oftentimes inadequate, insecure and  indifferent ~ wanting to disappear into the blackness of the textures I clothe myself in, whilst every once and awhile wanting to stand out in my ruffles and bias cut gowns, fleece coats and brocade empire waisted flounce jackets. Just as comfortable in the latest laces and velvets as I am in sweats and Gap jersey tops, down jackets and rain boots, elegant heels or sturdy wedges, I see a mini me happen as I watch my daughter Royal already go through the phases of critique and self-doubt as she dresses every day, making choices, assessing the self and then adding and subtracting accessories, altering sneaker color, changing a hairstyle, discerningly choosing the right nail color ~ she, a precocious 12, contrasted with me at 44, seemingly knowing and wise. Ha. I ask her opinion on boot height and lip color, skirt length, and the right jacket that goes with my outfit before walking out the door. Sometimes we need another’s perspective to help us see ourselves more clearly. It’s one of the secrets we share between us ~ how we feel when we look in the mirror, see images of ourselves out in the world, the like and dislike of those little unseeable flaws that are so clear to the eye and mind of the female gaze when she looks upon her own image… and others.

Many people say you are what you eat, but just as pointedly at times we are what we wear, the choices we make in how we want the world to perceive us. This past month I was introduced to the work of the amazingly prolific and insightful British writer Angela Carter, through the FASHION issue of Lapham’s Quarterly. Below are some images and the actual excerpt from Lapham’s that Deb Fink, Freida de Lackner and I performed November 14th 2015 at Starline Social Club in West Oakland. It was in many ways my birthday present to myself to try something new, collaborate on a performative rendering of something literary that happened to intersect with my clothes.. and in so doing I not only discovered the works and thoughts of some amazing writers on the role of style and fashion in our lives… but got to reflect deeply on the meaning and significance of those choices we make every day in how we enter our world and become who we are.

Here’s to continued curiosity, living and learning, desiring and anticipating, every day ~ what the Japanese call “waku doki.”

the inspiration for the clothes ~

“The difference between a lady and a flower girl is not how she behaves, but how she is treated.”~ Eliza Doolittle

“Clothes, as they say, make the man,’ she admitted. ’But they certainly have, with me, given me the confidence I often needed.’ In My Fair Lady, Audrey described the ‘absolutely divine dress’ that Cecil Beaton designed for the transformed cockney flower girl to wear at the ball. All I had to do was walk down the stairs. The dress is what made me do it.’
(taken from the book Audrey Style, via Rare Audrey Hepburn blog) 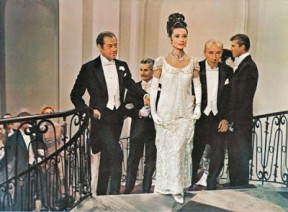 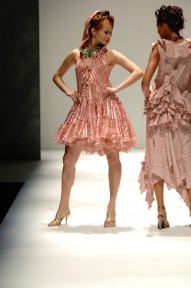 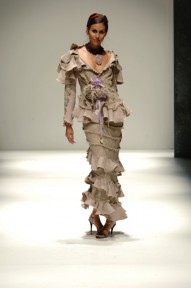 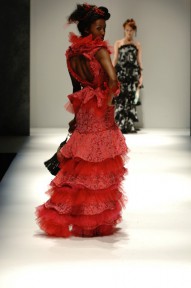 Above ~ a still from Cukor’s My Fair Lady, and 3 of my runway pieces from the 2006 My Fair Lady Collection. 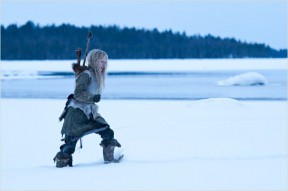 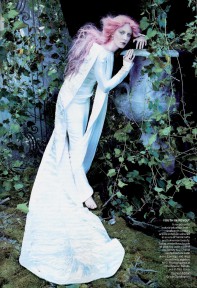 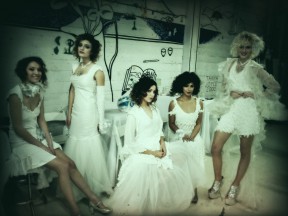 Above ~ a still from Wright’s HANNA, a photo of the actress Saoirse Ronan for Vogue, photographed by Steven Meisel and my SNOW 2013 collection, which includes the white version of the Wings of the Dove gown.

* Wings of the Dove, a dress named and inspired by Henry James 1902 novel and Iain Softley’s 1997 film

“The women one meets – what are they but books one has already read? You’re a library of the unknown, the uncut.”
Upon my word I’ve a subscription.” ~ Henry James, the Wings of the Dove 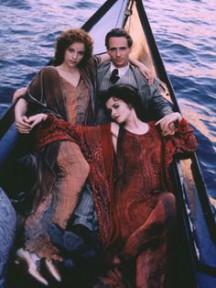 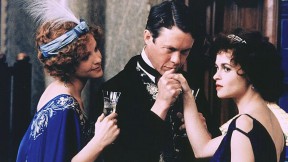 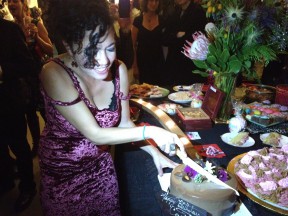 Above ~ Stills from The Wings of the Dove which inspired the gown… made in white (for the SNOW collection), fuchsia velvet (bottom image, me at my 42nd birthday party at my 4th street berkeley studio), and in black sparkle fabric for the Angela Carter piece.

The Performance of Angela Carter’s piece

“Velvet is back, skin anti-skin, mimic nakedness. Like leather and suede, only more subtly,
velvet simulates the flesh it conceals, a profoundly tactile fabric. Last winter’s satin invited the stroke, a slithering touch, this winter’s velvet invites a more sinuous caress. But the women who buy little brown velvet dresses
will probably do so in a state of unknowing, unaware they’re dressing up for parts in our daily theater of fact;
unaware, too, how mysterious that theater is.
For the nature of apparel is very complex. Clothes are so many things at once.
Our social shells; the system of signals with which we broadcast our intentions;
often the projections of our fantasy selves (a fat old woman in a bikini);
the formal uniform of our life roles (the businessman’s suit, the teacher’s tweed jacket with leather patches and ritual accessory of pipe in breast pocket); sometimes simple economic announcements of income or wealth
(real jewelry—especially inherited real jewelry, which throws in a bonus of class as well—or mink).
Clothes are our weapons, our challenges, our visible insults. 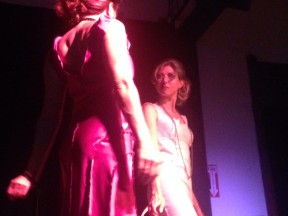 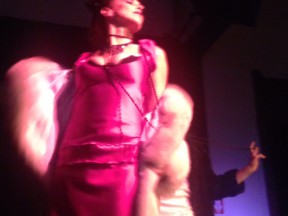 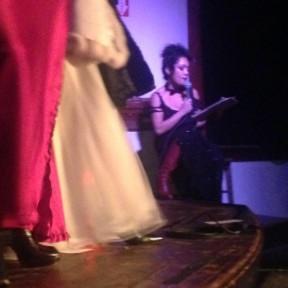 Above ~ Stills from the performance of Deb, Frieda and I. Photos by Suzanne Lettrick

And more. For we think our dress expresses ourselves but in fact it expresses our environment and, like advertising,
pop music, pulp fiction, and second-feature films, it does so almost at a subliminal, emotionally charged, instinctual,
non-intellectual level. The businessman, the fashion writers, the designers and models, the shopkeepers, the buyers,
the window dressers live in the same cloud of unknowing as us all; they think they mold the public taste
but really they’re blind puppets of a capricious goddess, goddess of mirrors, weathercocks and barometers,
whom the Elizabethans called Mutability… She is inscrutable but logical.
Style means the presentation of the self as a three-dimensional art object, to be wondered at and handled.
And this involves a new attitude to the self which is thus adorned. The gaudy rags of the flower children, the element of fancy dress even in “serious” clothes (the military look, the 1930s revival), extravagant and stylized face painting, wigs, hairpieces, among men the extraordinary recrudescence of the decorative mustache (and, indeed, the concept of the decorative man), fake tattooing—all these are in the nature of disguises. 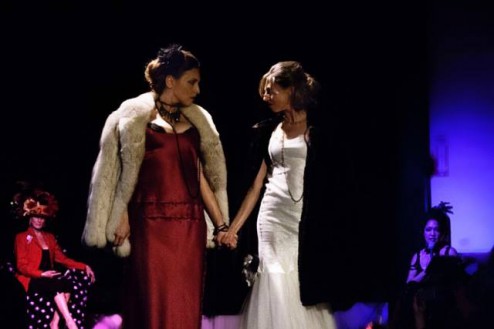 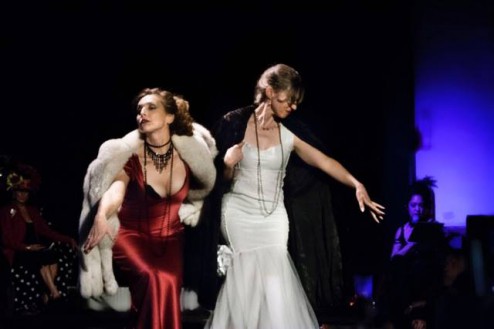 The Hell’s Angels and the other Californian motorcycle gangs deck themselves with Iron Crosses, Nazi helmets, necklets, and earrings, they grow their hair to their shoulders and dye their beards green, red, and purple, they cultivate halitosis and body odor. Perfect dandies of beastliness, they incarnate the American nightmare.
But this outlaw dress represents a real dissociation from society. It is a very serious joke and, in their Neanderthal way, the Hell’s Angels are obeying Camus’ law—that the dandy is always a rebel, that he challenges society because he challenges mortality. The motorcycle gangs challenge mortality face to face, doing 100 mph on a California freeway in Levi’s and swastikas, no crash helmet but a wide-awake hat, only a veneer of denim between the man and his death.
“The human being who is condemned to die is, at least,
magnificent before he disappears and his magnificence is his justification.”
In the pursuit of magnificence, nothing is sacred.” ~ angela carter 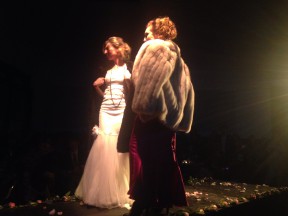 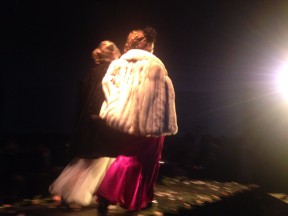 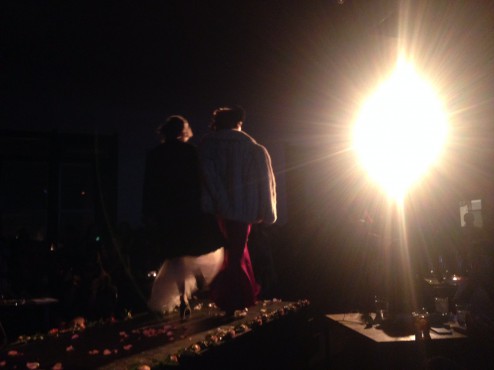 Above ~ photos by Suzanne Lettrick

“Life is a process of becoming, a combination of states we have to go through.
Where people fail is that they wish to elect a state and remain in it.
This is a kind of death.”
~ Anais Nin


I love goals ~ end of the year, mid-year, whenever. They propel me forward; and sometimes one needs this type of motivation… When I began this blog in May of 2014, I knew that I wanted…