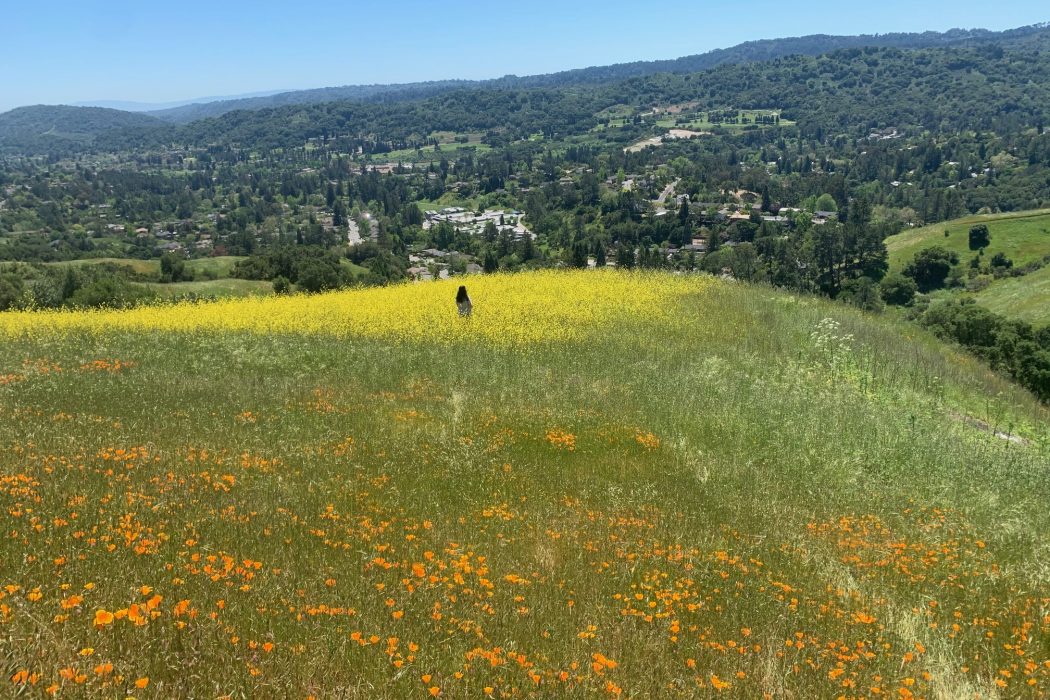 “Yesterday is gone. Tomorrow has not yet come. We have only today. Let us begin.” – Mother Teresa

you wake up and it’s friday. or maybe thursday, or could it already be the weekend, again? you can’t remember. the days blur together, endlessly. but you have your rituals and each day the same ~ no real differentiator. your kids’ days are more specific ~ a zoom class here, a wood project due there, an all-school gathering, take-out. and then there’s mondays when i sit in on a Cal graduate class taught by Dr. John Swartzberg, on infectious diseases and vaccinology. this is my moment of weekly structure,  a ritual that marks time, but says it’s distinctly Monday, can only be that day.

time: the indefinite continued progress of existence and events in the past, present, and future regarded as a whole. you take this time to think about what’s next (25%), what was (15%), and what is (60%)… of course much of what you do in the present, is gearing you towards future possibilities, and it is this luxury of learning and thinking and reflecting that you are grateful for. and sure, also, the long walks and long meals and late mornings baking, late afternoons trying new wines and new soups and salads and desserts. you are sure this wouldn’t have happened, never ever, if life was going on as usual. this little respite, this pause, you want to last… because what does tomorrow really look like? back to shopping at Crossroads and Radbird ~ your weekly stop-ins with Royal always a highlight; dinners at Kevin’s Vietnamese and Manpuku, Chez Panisse and Ramen Shop, Casa Orinda or Village Pizza. you miss this much, but can barely remember 2 months ago when you ate at all these places regularly, or imagine in two months time eating inside a restaurant again. when will it “feel safe” to partake? you’re truly not sure. it took weeks to wrap your head around take out, and even longer to drive through the bridge to Berkeley, to pick up vegetables at Chez… there’s no going back to normal, but re-imagining a new one…

“It’s no use going back to yesterday, because I was a different person then.” ~ Lewis Carroll

but you are sure of this: our lives have changed, dramatically. and if we’re not going back to yesterday’s normalcy, what does the future look like and feel like ~ and ~ what are the new rules of engagement? as an anthropologist, this is my expertise ~ patterns of human behavior, their role in culture and society, and how they change through time (below, a pic of me in Turkey circa 1995, when i wanted it to be a field site, curious to understand the role of architecture and the use of public space in ancient Ephesus). Back in 1998 I wrote a masters thesis that looked at Hollywood in Britain and the effect of historical narratives on contemporary interpretations of what it means to be American. I was living in 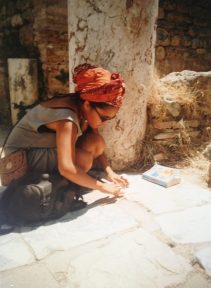 England, again, and wanted to understand everyones’ preconceptions of who i was immediately defined by my accent but not necessarily by my looks. In 2001 I completed a doctoral thesis that focused on the art world and the encounters between artists, art collectors, gallerists and audiences in understanding Caribbean identity both at home and abroad. Entitled “Jamaican Art Worlds: Encounters, Transformations, Metamorphoses,” I looked at the circulation and consumption of blackness in the art and tourist worlds. Becoming a fashion designer (in 2000) and salonniere (in 2012), I focused on local and intimate behaviors of the Bay Area ~ the interaction between fashion designer and client and who shaped whom’s tastes? Could I in fact create and thus influence what women desired, what made them feel good, based on what I liked to wear ~ fabrics and textures, silhouettes and volume, colors and juxtapositions? With the salon dinners a whole other set of questions arose ~ who would come and why? how can we cultivate connections between strangers ~ how do people want to gather? But larger questions perplexed me ~ what did people want in connecting, to take away from each interaction? what did i want? and how do i get what i want, except by creating it? In 2011 Peter Sellars sat across from me at Cafe Milano on Bancroft Way (he was in town in rehearsals fro Toni Morrison’s Desdemona) ~ and said this:  “you have to imagine a world, create it, and then live in it…” which i then did, responding to this idea of Riesman’s “the lonely crowd,” based on his 1950 analysis of the changing american character. So from 2012 to 2016 I hosted 77 salon dinners in my 4th street studio, culminating in many ways in an “art of gathering” installation at YBCA in Dec 2015. Then, in 2017 I wanted a job, as in a  stable one with a paycheck, and since 2017 (off and on) until the first week of March I’ve been a consulting anthropologist at Apple. I got to work on close to a dozen different projects in three different areas (two of which I can’t talk about), but my customer-facing role in retail marketing through being “guest” Head of Programming for Today at Apple asked a set of new(ish) questions ~ first, the role of art and culture in the Bay Area, who defines it, and how would Apple as a global company define it, the balance of how employees versus retail customers would interpret it~ and then, curating the 170+ sessions around the intersection of this matrix : internally ~ Apple corporate / Apple retail / myself as a consulting curator; and externally ~ customers / artists. what did people want to see, experience (and learn) in Apple retail stores in face to face encounters (versos on-line) , and specifically in the Apple Union Square flagship? I talk about it in THIS piece… Most recently, I got to spend the past 6 months working on another project in Environment, Policy and Social Initiatives which ended March 5th and left me in pursuit of questions of the role of non-profit organizations, creativity-youth-technology, and what it means to have access to education and the arts, both as makers and consumers of culture. 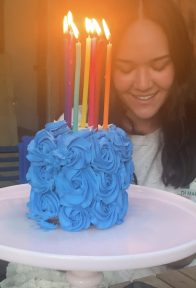 with everything on hold since March 17th, and all my job prospects ~ many which were greenlit early March, now cancelled or postponed, and others not, like Royal’s 17th birthday on May 4th, or today May 10th ~ Mother’s Day and Royal’s first day back at Starbucks in Orinda (!!) ~ i get to spend my time trying to understand what is happening with the effects of the coronavirus, the communication and interpretation of it, by the media for the masses ~ especially locally. this constant questioning, attempt at understanding and trying to figure out ways of moving forward, is what i do. it’s how i see the world ~ the global in the local, the larger social structure and patterns of behavior in the individual…

the graduate school class I got to sit in on ….. just ended on Monday and I am left with my Masterclasses, baking, screening, learning and continually trying to be productive until there are signs of what it makes sense for me (for many of us, really) to do next: teach, consult, design, program, write? or all of the above? below, some (more) things, I’ve been obsessed with (and excited by) in the past 40 days since my last post March 31st, 15 days after sheltering in place… today, it’s day #55 ~ 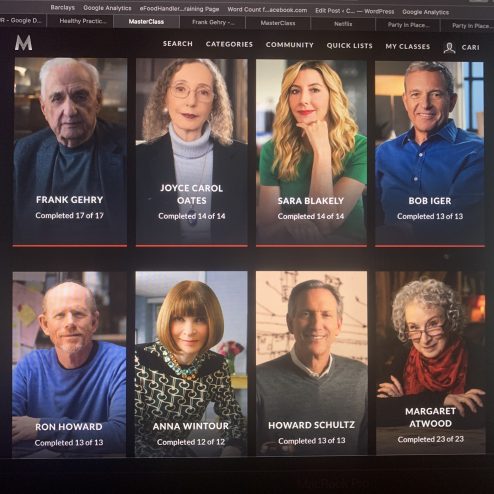 in fashion: Anna Wintour (also, see The September Issue, The Devil Wears Prada, The First Monday in May, In Vogue: The Editor’s Eye);

in writing: Margaret Atwood (The Handmaid’s Tale) + Joyce Carol Oates  (an interview Oct 2019 on Trump, society + sadness of being alone) 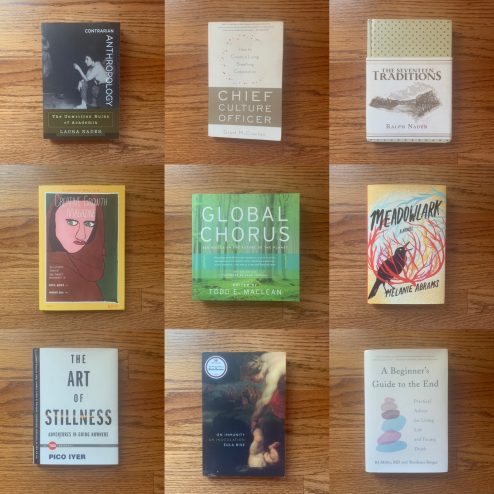 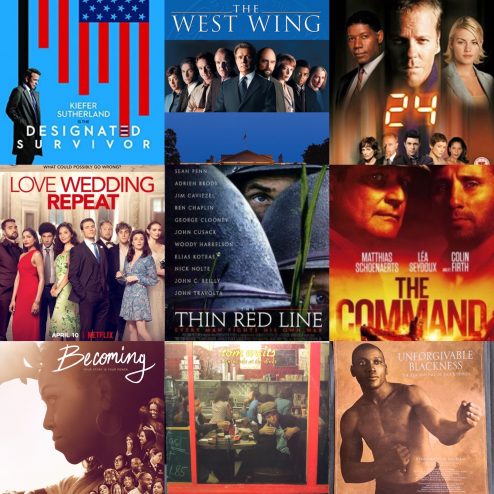 and… last night, a screening of Steve Martin’s iconic LA Story (1991) ~ remember that one?! ~ “Let’s just say I was deeply unhappy, but I didn’t know it because I was so happy all the time…” / “a kiss may not be the truth but it is what we wish were true…” 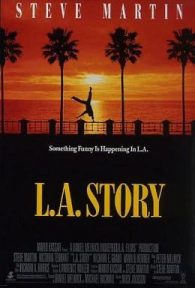 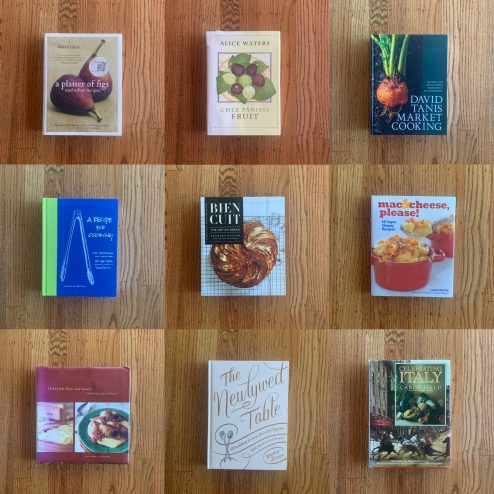 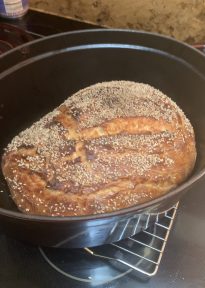 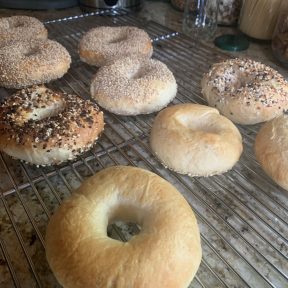 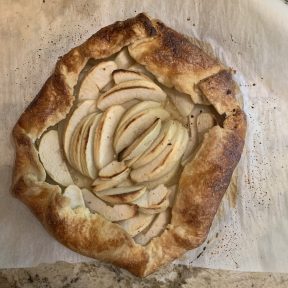 a bit of painting (by royal), and sculpting textile sculptures (below), a continuation of a texture series I did in 2015-2016 (here with Barbie collection for Lena Ingram + Stuart Locklear’s SAFFRON short), as well as a commissioned fabric “interpretation” of red wine profiles for Stonestreet Winery in Healdsburg 2013 (pictured below, with Guillaume + I)…. 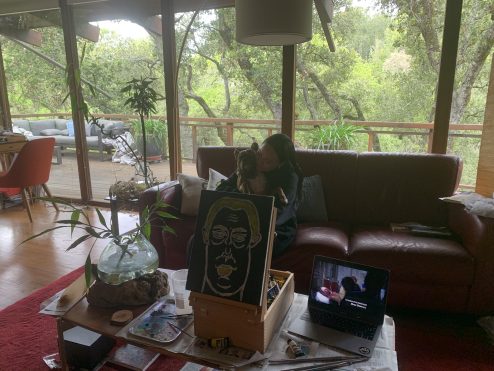 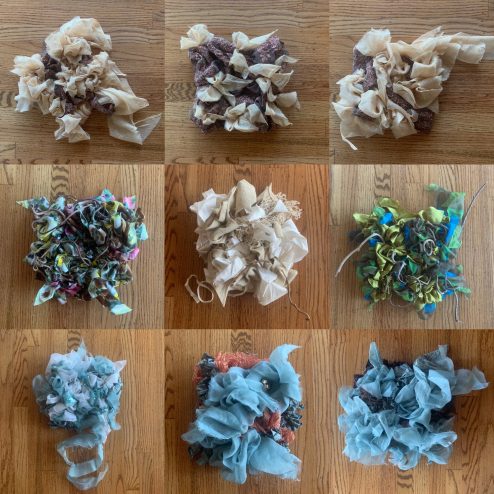 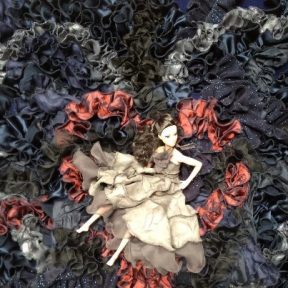 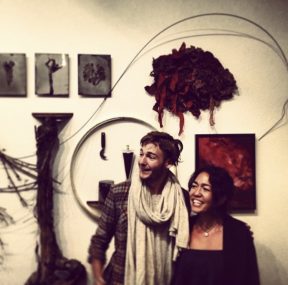 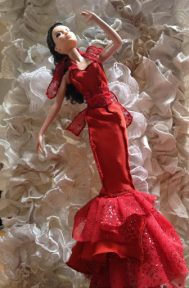 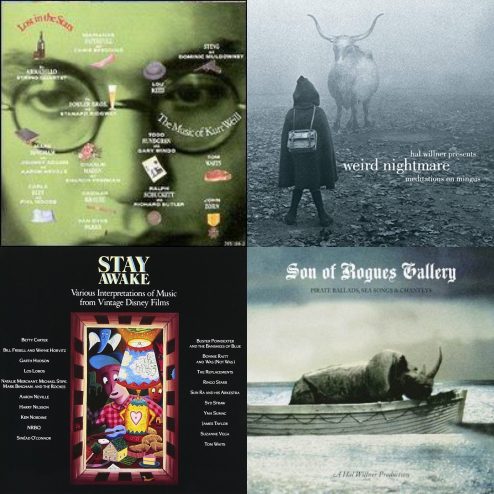 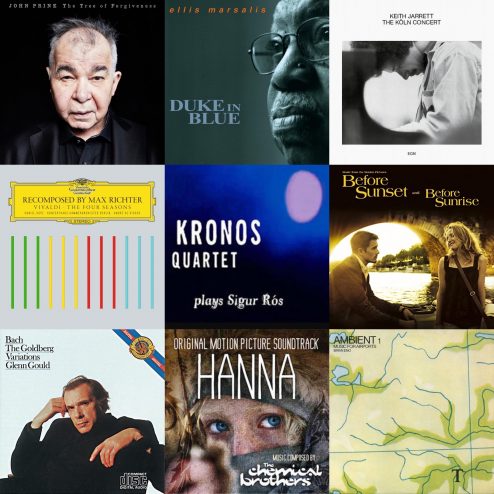 1. Hal Willner / go to Jeremy Shatan’s piece on Hal Willner, for clips from Hal’s “5 greatest albums” including: Lost in the Stars: The Music of Kurt Weill (1985), Adam’N’Eve by Gavin Friday (1992), Dead City Radio by William S. Burroughs (1989), Amarcord Nino Rota (1981) and Stay Awake: Various interpretations of Music from Vintage  Disney Films (1988)… Hal, who was Saturday Night Live’s composer since 1980, passed away from complications caused by COVID-19, on April 7th, a day after his 64th birthday.

2. 1. John Prine / all of his albums, but especially this performance at Austin City Limits of “When I Get to Heaven”  and “The Other Side of Town” and with Bonnie Raitt, singing “Angel of Montgomery” Nov 2019. John passed away April 7th 2020, to coronavirus complications.

3. Ellis Marsalis Jr, who died April 1st, also of complications from COVID-19, father of Wynton and Branford, who I mostly knew of most recently because of the Ellis Marsalis Center and Musicians Village in New Orleans which inspired some of the work I did for Apple… Here are a couple of beautiful pieces: THIS (with Mr. Rogers, honoring Ellis) and THIS “Twelve’s It.”

1. US Digital Response / founded by former US Deputy CTOs and tech industry veterans, including founder of Code for America’s Jennifer Pahlka, Cori Zarek, Raylene Yung and Ryan Panchadsaram ~ “USDR helps governments meet the challenges of the COVID-19 crisis by strengthening decision-making and supporting their ability to effectively deliver critical services to the public at scale.”

7. April 23, 2020 / Olga Khazan’s “Americans are Too Optimistic to Comprehend the Coronavirus: Why Americans Didn’t See This Pandemic Coming” in The Atlantic

9. May 5, 2020 / Taffy Brodesser-Akner’s “What Happened to Val Kilmer? He’s Just Starting to Figure It Out,” in the New York Times

10. May 5, 2020 / Masha Gessen’s “The Political Consequences of Loneliness and Isolation During the Pandemic” in the NEW YORKER

11. May 6, 2020 / Dr. John Swartzberg + Ed Wasserman’s “The Role of Journalism in a Global Pandemic” on UC Berkeley, Berkeley Conversations 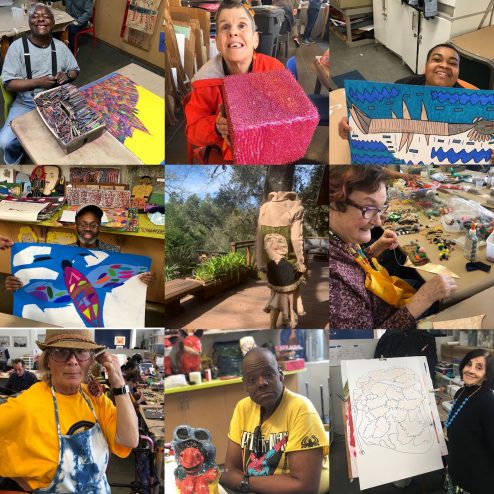 ~~~~~
“Historically, pandemics have forced humans to break with the past and imagine their world anew. This one is no different. It is a portal, a gateway between one world and the next. We can choose to walk through it, dragging the carcasses of our prejudice and hatred, our avarice, our data banks and dead ideas, our dead rivers and smoky skies behind us. Or we can walk through lightly, with little luggage, ready to imagine another world. And ready to fight for it.” ~ arundhati roy 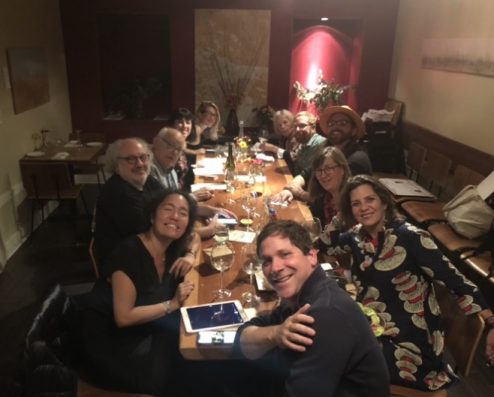 above / a dinner celebrating Ralph Steadman, and his retrospective at the Haight Art Center… November 2018… and the same evening Pamela Esterson introduced me to her dear friend, the music producer and SNL composer Hal Willner, who’s pictured beside me on my left…. he passed away in NYC April 7th 2020, from complications from COVID-19….(RIP dear Hal) bringing the reality of this moment closer to the seeming bubble we live in in Lamorinda/East Bay/Bay Area/California…

“We must hurry! said Mr. Wonka.

We have so much time and so little to do!

No! Wait! Strike that! Reverse it!”


“There’s only one thing in life, and that’s the continual renewal of inspiration.” ~ diana vreeland ~~~~~ above / designer emily payne with husband Isaac and daughter Devon ~ the inspiration for her Devon Rose collection)…