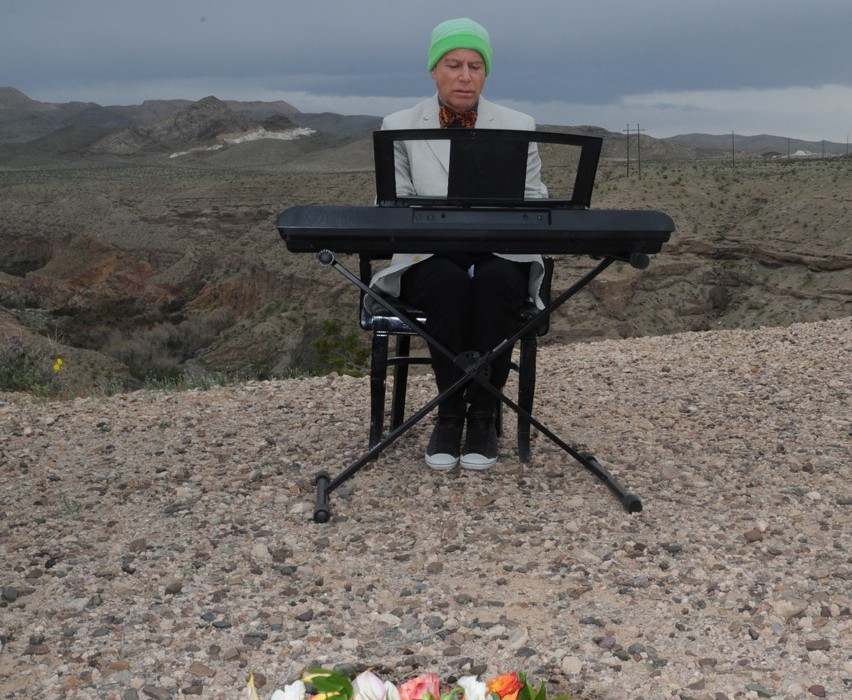 “After silence, that which comes nearest to expressing the inexpressible is music.” ~ Aldous Huxley 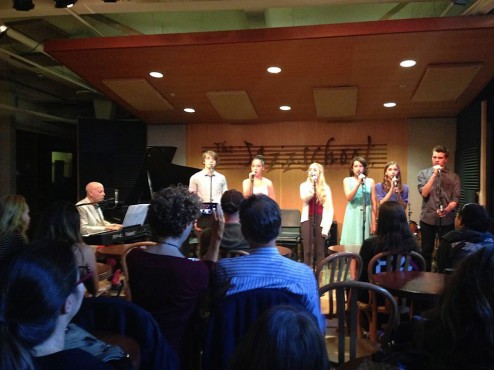 I’ve always had a love affair with music ~ whether dancing to the beat of the drum or deep bass, listening to  the reverberation of the cello, the echo of the voice, it is for me a secret sanctuary from the every day. Whenever I feel lonely or happy, depressed or exhaulted, I play my favorite music that either makes me remember, or makes me forget… That’s the power of it ~ it brings you to another world. You get lost in it. My daughter Royal gets lost in music ~ both music that comes from outside of her, or most often deep down within her. And this is our bond ~ understanding its power and its ability to change a mood, a situation, an atmosphere. It brings us together, for it’s a common language. When Royal wanted to suddenly try out for vocals at Oakland School of the Arts (instead of dance), I was on the phone desperately trying to find her the perfect teacher, an inspiring mentor. It was only weeks before the audition. That is how we found Ken, and GLEE, and it changed our life. Royal didn’t get into OSA this time around, but what I love about her personality, her determination, is after the tears ~ both hers and mine ~ she woke up the next morning and asked “what should I sing next year?”…it was worth it ~ the not getting in…and so we continue on with Ken, her vocals coach ~ so she can discover her voice, her range, her self. I sat down with Ken at ALCHEMY cafe in Oakland, near to his Iyengar Yoga studio…and we talked of the power of breath, music, our body as anchor, voice as expression, and it was amazing to see how our lives overlapped years before they ever really did.

“Feelings come and go like clouds in a windy sky. Conscious breathing is my anchor.” ~ Thick Nhat Hanh

On the path to NOW ~ Yoga and Music ~ “I started a yoga practice 25 years ago, and I love the precision of it, which is what I love about my musical work, too. They can see where you’re misaligned, and are incredibly insightful, which is awesome. As you age you want your body to be strong and flexible, so you can use your body more fluently. This practice provides it. I used to do stronger practices, which move very fast. Iyengar is really challenging. It’s not easy. Holding your leg up with a strap for four minutes is NOT easy. It’s insidiously difficult in its own way. It’s an amazingly restorative class using props of pillows, chairs and graceful postures that are just wonderful, which I love. This element of posture I work with is my goal work with teaching. Breath is a very important aspect of a clear channel in vocalism. I’m keen on seeing where people are misaligned ~ their chest sunken ~ all of this gets in the way of clear vocal and sound resonance. An example is a student I had recently who came in hunched over and I straightened her up and she had never stood this well. She felt so much more empowered. It was such an enlightenment experience ~ as a singer and as a human ~ just changing her posture. It’s unbelievable. Posture has a lot to do with the emotional in vocals. They are tied together. People have a lot of fear around singing. It’s a vulnerable thing to share ~ to have a voice. A great many similarities between yoga and singing.”

How did you get to here? ~ “I’ve had a very broad education that started in the classical world ~ learning how to study very thoroughly (like Iyengar) ~ precision, thoroughness and deep study in every aspect, requires deep discipline. I’ve always been a student, and that’s been the way I’ve functioned. Always learning ~ creatively through poetry classes, drawing, jazz piano,etc. Something has always been brewing. There’s both the desire, and need to study. When I was 5 years old I started studying the piano, and I loved it right away. It took off for me. I elected to practice. At the age of 10 I was listening to symphonic music. My dad was a sax player so that germinated it for us. My two other brothers are both musicians. It was an inherited syndrome. The second element was that I had taken it on myself to study myself. I have been in psycho-analysis for 15 years ~ both group and privately, and it brings up family dynamics and intrinsically has changed my life. It’s like jazz improvisation. It’s a co-relationship you create with the analyst, which is very close. It’s really powerful work ~ psychic surgery, and it can be very painful at times. It’s a commitment that you make to yourself that is a very large one. In NYC in the 80’s I did the EST training, with the no bathroom breaks and all of that stuff. It opens a lot of passages for you. I did the 3 day thing ~ 15 hours a day, and I was smoking at the time and quit right after. It helped resolve a lot of conflict in relationships that were worth saving. I was attracted to all that stuff. I did two years of solid workshops. I’ve done a million things that have enriched me. It has also given me the tools to work on another level with people. It has given me insight. I can see people and what they need emotionally and vocally. They go together.” 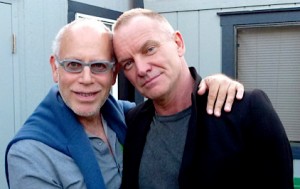 On special music moments in the past ~ “I was with STING playing Carnegie Hall for seven consecutive years. I played piano with him and Elton John for the Rainforest Foundation Concert; and I went to Europe with him. I met him through my brother Ron, who had an exercise studio at Carnegie Hall. He was private training Sting. Sting was doing a film ~ Nothing Like the Sun. I also did the theme music, the opening sequence to Someone to Watch Over Me with Tom Berenger and Mimi Rogers.”

On NYC to Oakland~ “In the beginning the question was ~ how am I going to make a living? In bars and restaurants ~ Jim McMullen’s on the Upper East Side, at 3rd in the 60s. Rupert’s was a fun period of time. I played the Rainbow Room. I opened for Tony Bennett. I did a one hour show ~ American Songbook from the 30s to 50s. I played everywhere. I was in NY for most of my life and loving it and I just feel ~ being a young person in the 70s and 80s was a very exciting time but after awhile… Mapplethorpe, Patti Smith. So amazing, and so much going on, but eventually it was a place to live, where I felt I had “rung out all the juice”, at least for me. So, should I stay here for the rest of my life or do something different? I wanted to live in a house with a garden and a lawn and a basement and start something new and fresh and recreate my life…at 58!”

On GLEE at the Jazz School, California Jazz Conservatory ~ “I started working with a couple young people, college age from MIT and UCLA and they were incredibly receptive and disciplined and just enjoyable and interested in learning and I hadn’t worked with young people. In ny it was mostly professional people in their 30s and 40s. So when I got to California I thought ~ oh young people, are they all like this? My suggestion at Jazz School was to create a class that only be young people from 11-18. So Royal was in the 1st and 2nd one. And I’m committed to making this continue because there are some really talented kids that are malleable and improve so quickly, and it just takes off and it’s mind-blowing. I love it. I have a lot of affection for this project.” 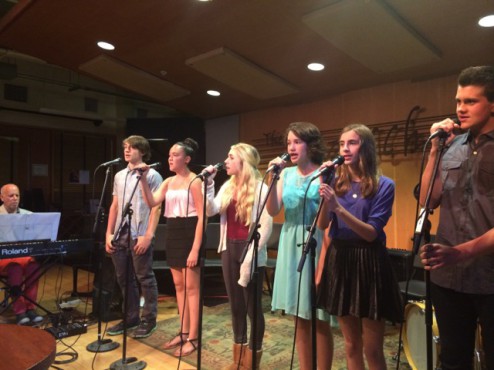 On working with Royal ~ “I remember the first lesson with Royal. She wouldn’t make a sound. She was petrified. I looked at her and said we’re going to do this together. It took her 5 minutes to get to a place of letting go. I kept encouraging her ~ a little more and a little more until I arrived at enough so that it would feel successful to her. It had a great impact for me and for her. It was such a dramatic shift and that was the shift we needed. That’s how I use the psychological.”

On favorites ~ Music, Film, Performances & Places we’d like to go ~ “Recently I’ve gotten really obsessed with Sara Bareilles ~ Gravity. I played it 100s of times. It was about being released and letting go in some way. The vocal and song-writing was perfect! Years ago Joni Mitchell’s BLUE album. For film, HER is my most recent favorite, but when I lived in Brooklyn near the Academy of Music I would go to the cinema all the time. One that stuck in my head was The Talented Mr Ripley. For opera performances ~ Peter Sellar’s reworking of the Mozart Operas ~Magic Flute, loved it. Cosi Fan Tutte, Marriage of Figaro. They were mind-blowing to me. The costumes and sets were completely modern. When I was at Julliard I thought I was going to be in opera; and I did that for awhile but i knew that was not going to be for

me. People in opera are geniuses. Really, it’s another world… I have never been to Venice, but I leave certain things for certain things ~ I like to save it for a special time. For example three years ago I had oysters for the first time at the Marshall Store. Certain things are special and it’s cool to save them. For food it’s really fun, I never drank martinis and I had my first martini seven years ago and thought this is awesome. This is fucking genius. It was put in a different context. It makes something very special and very celebratory. Food virginity. Sardines ~ I haven’t had yet; I’ll save them for Venice. I think I’ll love them. It’s part of the waiting thing.”

BE: aware
DO: kind things
EAT: chicken pot pie
DRINK: red wine
LOVE: people
LISTEN: male jazz vocalists
FORGET: everything
WHAT ~ is the world doing?
WHERE ~ will I be next year?
WHY ~ do people hurt animals?
HOW ~ can I make more of an impact
SWEAR ~ Fuck that shit!

“I took a deep breath and listened to the old brag of my heart. I am, I am, I am.” ~ Sylvia Plath


Pixar is our backyard… Located in Emeryville, California, it is literally less than ten blocks away from where we live in West End Commons in West Oakland. I used to think of this more abstractly as…