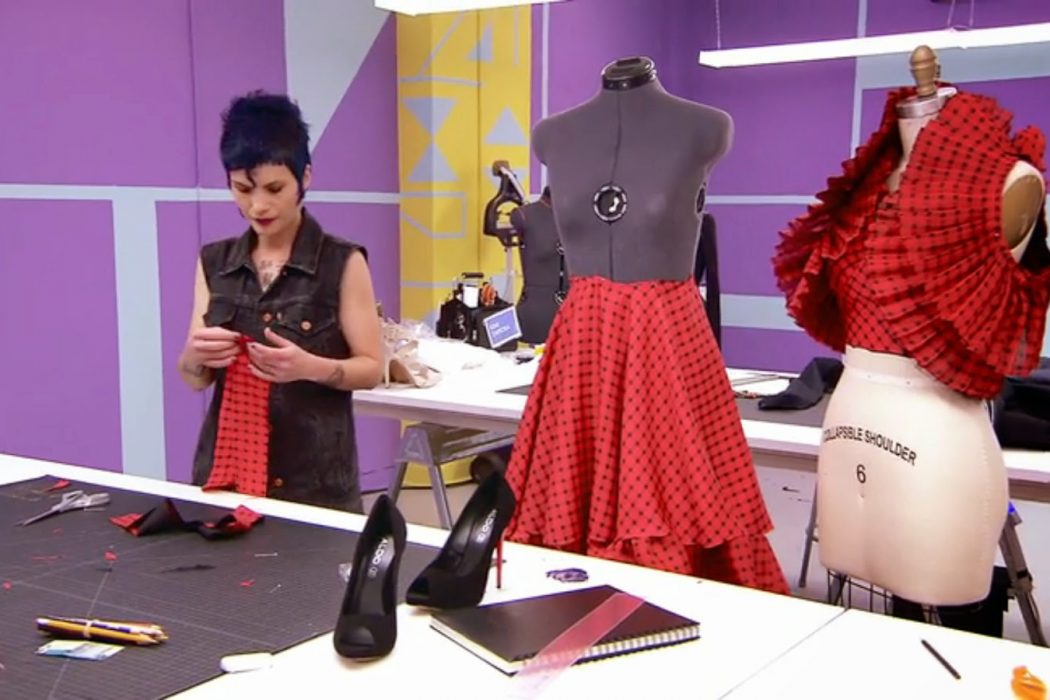 “There’s only one thing in life, and that’s the continual renewal of inspiration.” ~ diana vreeland 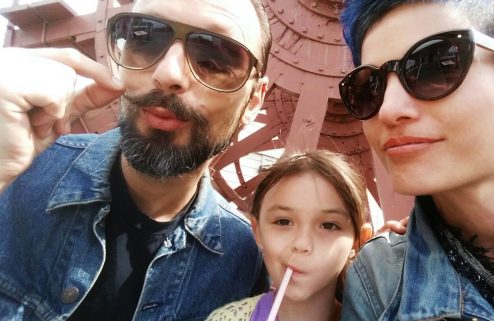 i love how things transpire… i become part of the WorldWideWomen leadership committee for their Girls Festival (which is this coming Saturday October 15th), I suggest a fashion show might be a fun part of the main stage exhibit (because i know the importance of fashion in girls’ worlds) and then i have to produce it. At the time (3 months ago) I was no longer making a kids or women’s line for that matter, and became part of the production of the Girls Festival so that my daughter Royal could be part of it ~ in some manner, in some form; and what better way than to stage a fashion show!? and to (possibly) include her, because that is what she’s interested in ~ clothes, make-up, style ~ fashion. and so i go to Jake Wall (of JAKE), a collaborator over the years and recent Project Runway designer. He’s local and making clothes and can he somehow be part of it, I ask ~ AND who else is out there ~ think girls, their moms, inspiring, local…

Jake reminds me of Stephanie Bodnar (whom I met during a Suit Up 2014 runway show for Human Rights Campaign that we all collaborate on)  and then e-introduces me to Emily Payne, who was also on Project Runway. She’s perfect, he says. Even has a girls’ line called Devon Rose. And so it goes…. we began the conversation and then i turned up at a showing of her children’s and woman’s LEATHER TONGUE line on Maiden Lane a couple weeks ago ~ part of Britex’s PROJKT with designers Kini Zamora, Richard Hallmarq, and Rey Ortiz… AND to make the ties even stronger, as I ask The Sewing Room’s Jennifer Serr to be part of the show (15 of her students will be showing their work on the runway as well), she has worked with Emily before ~ having emily be a guest designer for her students in her Alameda studio… such a small small world. below, connecting the dots through image and text ~ some questions for emily, and a few pictures of her beautiful pieces… 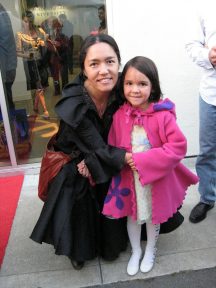 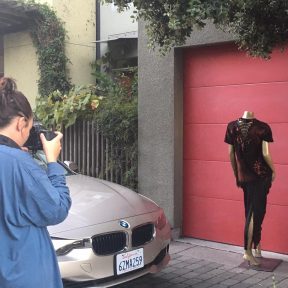 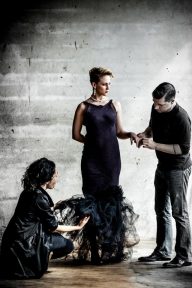 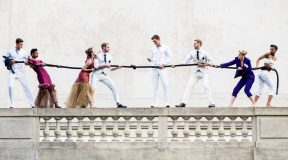 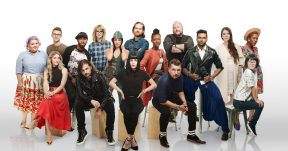 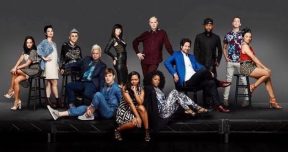 above / royal and i (my little inspiration for the baby royal line i made from 2003-2013) at the Academy of Art runway show; Royal this past weekend, now 13 yrs old, photographing her first look for the Girls Festival runway show on Saturday; Jake Wall and I on a Hitchcock-inspired photoshoot at the McCroskey Factory, photo: Kelly Puleio; Legion of Honor photoshoot of my cari borja/clothesmaker collection and Jake’s Artful Gentleman collection, by Kelly Puleio. Jake Wall in Project Runway / Season 14, and Emily Payne in Project Runway All Stars, Season 5 and Season 13 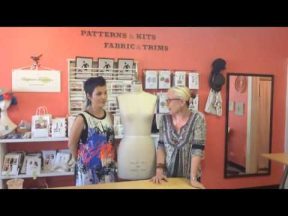 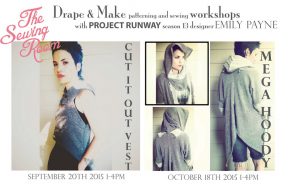 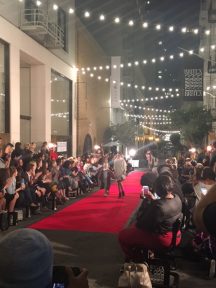 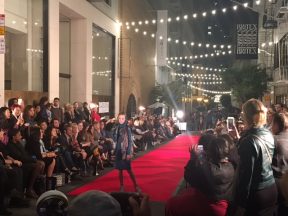 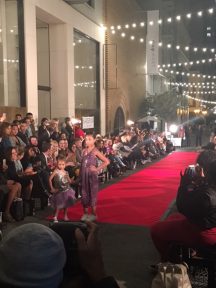 above / Emily with Jennifer Serr at The Sewing Room in Alameda; 3 images of a few Devon Rose looks from Emily’s recent show on Maiden Lane in San Francisco

1. how did you come to designing ~ for women and then your devon rose children’s line?

I started to get into fashion through my love for shopping and fashion magazines (my favorite at that time was called TAXI) but I was very into the theatrical designers at that time, like Muglar and Gaultier…so I thought I would be into costume design…but then I found a call for local designers sitting on top of the trash at my school (The Art Institute of Dallas) and I entered 5 designs at a show called “Catwalk” and became hooked! I got into doing kids because of my daughter Devon Rose, and I created a line named after her when she was 6 months old:) 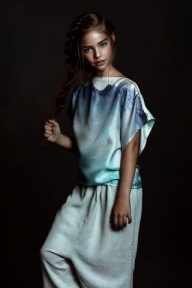 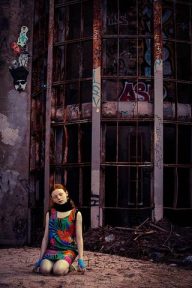 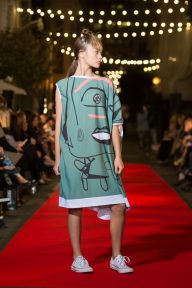 2. what inspires your lines? and what do you think is important about girls and teens feeling a sense of self in your clothes?

I’m inspired by Devon mostly for the kids line, she’s my muse and the face of the line. I’ve also been collaborating with other artists for my adult line which is inspiring on both ends. I’m very about comfort first so…. YES! I’m all about girls and teens feeling a sense of self in there bodies and clothing. I strive to make pieces that are comfortable and easy to wear, but that also elevate the overall look and work well with layering so that the wearer can incorporate my pieces easily into their own wardrobes and make it “their own.” 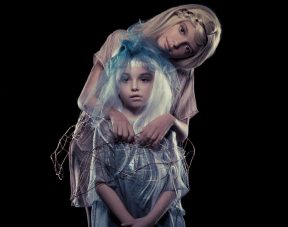 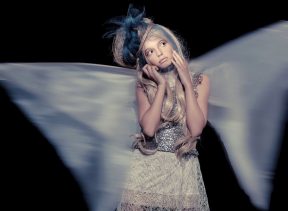 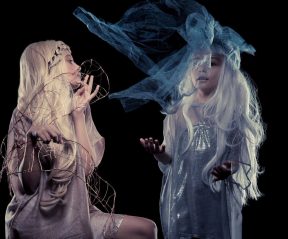 3. what was it like on Project Runway? Favorite and worst moments? favorite look you made?

Being on Project Runway and also on Allstars was a great experience that I will never forget. It’s changed my life and made me a much better designer in many ways. It’s like a super intense boot camp! My favorite look was my second win on Allstars (challenge was to create a “badass” look for the Spring) 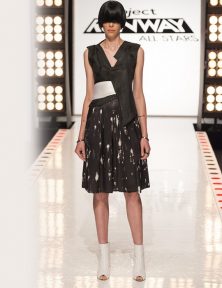 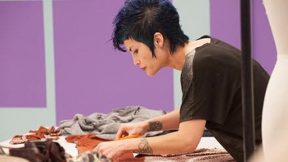 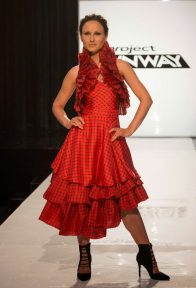 above / emily’s “rebel with a cause” winning design for Project Runway’s All Stars…and Emily at work. and one of my fave looks by her.

4. advice for any of the aspiring girl and teen and in-school designers who might want to either be on Project Runway or have their own clothing line?

My advice to any girl that wants to be on Project Runway or starting up their own clothing line is to never give up….I tried out 3 times before I got on! Also, don’t take criticism of your designs personally…it’s hard to do because it’s your art and form of expression, but it’s also a business and you absolutely need to grow a thick skin and not let criticism bring you down. There will always be haters out there, don’t let them stop you from doing what you love:) 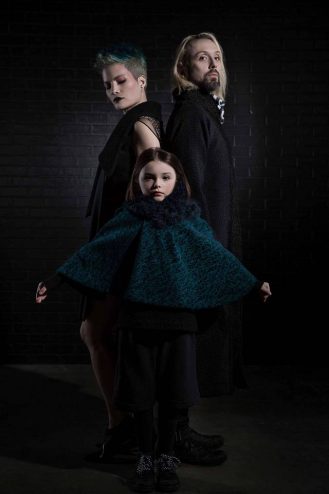 This unique girl-power focused fashion presentation will feature collections that range from established Project Runway designers Jake Wall and Blake Patterson from Season 14 and Emily Payne from Season 13 to FIDM graduates, students from Oakland School of the Arts and from Jennifer Serr’s Alameda-based The Sewing Room. The show will also include looks from local designers Racheal Matthews, Stephanie Bodnar, a mini up-cycled collection from 13 year old Royal Borja Bernberg, and a mommy and me collection inspired by the upcoming elections. The show will include innovative new looks from casual ready-to-wear and Athleta’s new Girls Activewear collection to party dresses for prom, modeled by Bay Area girls aged 8-18. Choreographed by model coach and TV host Charleston Pierce, with styling by Mara Kolesas of GoodFitStyle and produced by highly regarded local fashion designer and anthropologist Cari Borja.

There will be a meet and greet after the runway show with the show participants and Project Runway designers Jake Wall and Blake Patterson from JAKE and Emily Payne from Devon Rose which will include some of their latest signature fashions straight from New York Fashion Week and the San Francisco Symphony and Opera Galas.

* to read more about the Sewing Room and Jennifer’s student designers, click HERE… 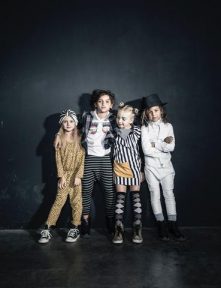 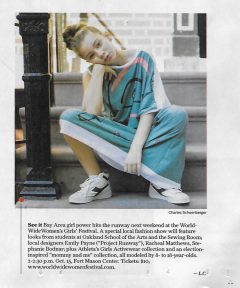 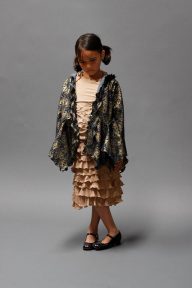 “There is a vitality, a life force, an energy, a quickening that is translated through you into action, and because there is only one of you in all time, this expression is unique. And if you block it, it will never exist through any other medium and will be lost.” ~ martha graham 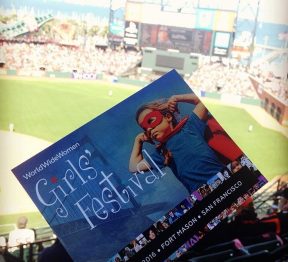