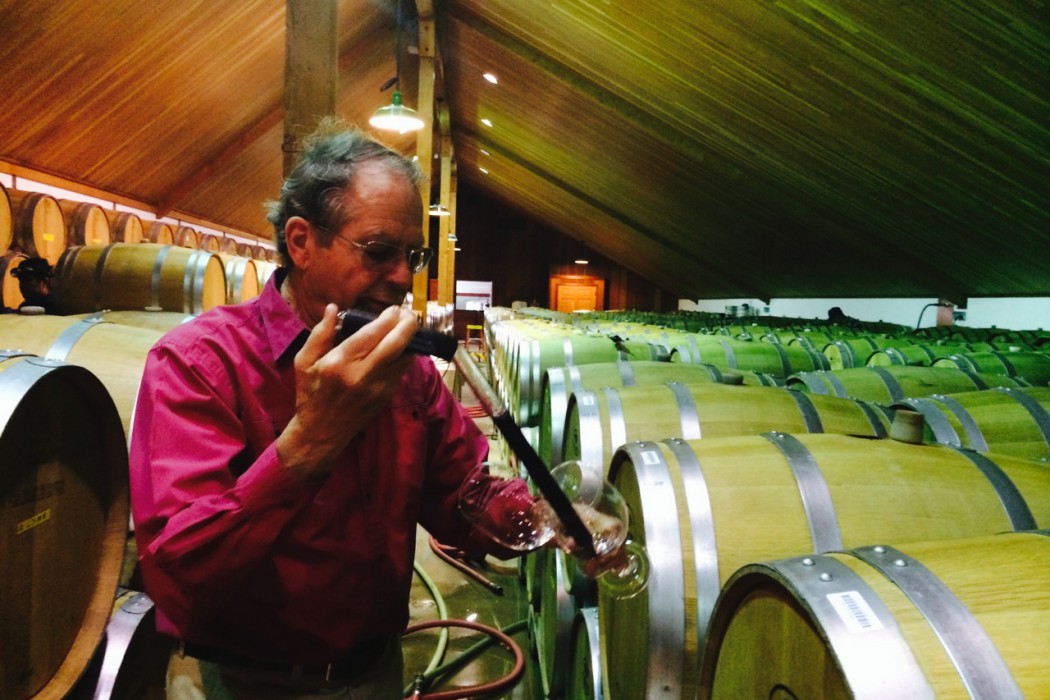 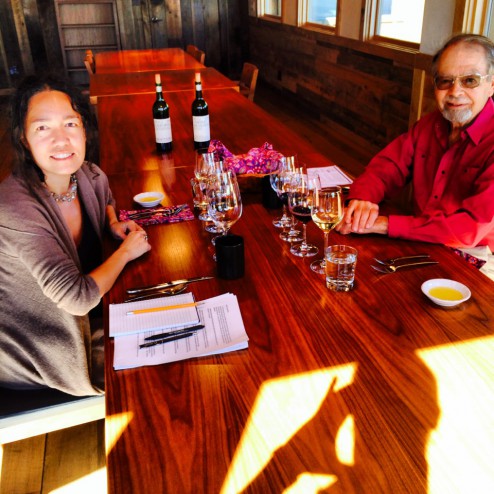 I met Paul Draper through his wine. It was my 40th birthday, Chez Panisse, and the wine ~ a 1985 Geyserville Zinfandel…I had my friend Jonno, the wine director, pick out the wines for the evening to go with the menu. I had wanted fried rabbit ~ a favorite dish of mine; but we ended up with pork, family style, and it was perfect. It was a Monday, November 28th 2011 and we took over the back room. There were 35 of us. I’m not sure at what point the RIDGE would come out and be passed around but I remember a moment when my friend Alice, who opened Chez Panisse 40 years before, spoke of Paul and his vision, his wines, and Montebello, and it stuck in my head. It was a moment in time that meant the world to her. I could hear it in her voice, and wished I was there… That memory lingered, along with the image of the bottle.

Flash forward 2 years later, a champagne tasting/class on a Monday at Chez Panisse; the previous week was Pinot Noir… and again, the name Ridge, and the word Montebello. It was that sweet spot of the afternoon and I thought it would be fun to invite Paul to a dinner in December 2013, so I called him (Ridge Winery) from my car. I thought it would be amazing to have the iconic California wine-maker himself to my studio for dinner. December didn’t happen, but January did (Salon Dinner #38), and our connection on the telephone? Travels through Italy, Harry’s Bar and the difference between an aperol or campari spritz in Venice.

On Chez Panisse ~ “Alice had the Geyserville Zinfandel on the list from the beginning, like the one we’re drinking now. When you went to Chez Panisse, you go the sense that she was cooking for her friends. It was a place to gather, and enjoy food and wine, but it’s about each other’s company. She was doing something for all of us. with a great deal of love ~ for us to gather, talk, and exchange. That idea was like when I was in Europe. That was what it was all about. This seemed to be her intent and that was what happened. There was this collection of people around Chez Panisse. And we ~ my partners and I ~ the 8 of us, would have dinners there, maybe four or five dinners i can remember and Alice would print these menus… I remember the menus.”

On personal TERROIR ~“We raised everything we ate. I grew up in northern Illinois. My father you could say, lost confidence in the economy. It was around World War II, and he went back to farming. We had a Victory Garden and raised everything ~ berries, fruits and vegetables, hogs, chickens, ducks, 40 steer. We milked cows and even had honey bees, and worked the farm with horses. I grew up with this idea. We were present at EVERY dinner. The conversation was not about politics, but about the environment, the farm and friends. My mother was a big reader, and also social and brought us into the social sphere. My sister played the piano and we went to the Chicago Symphony once a week. My father, for better or worse, was very principled. He took care of people. He saw his role as one to serve, to provide something of value to people, but he did it quietly, and was not social. Living RIGHT was ingrained in everything he did. All of that began with him. He was my first influence…

At school, it was all one family, in terms of how you treated people, which extended the ethical trainings. We had chapel every week and had incredible speakers, like Carl Sandberg, and underlying our learning was the Athenian oath ~ to leave the world a better place than you found it. I didn’t have co-ed until Stanford, and that lack of any diversion in school, I’m glad I had that experience. At Choate (boarding school in Connecticut), it was Huxley and Hemingway. They were my influences on travel in Europe, although my mom had spent time in Grenoble and Istanbul. But Hemingway’s “Across the River and in the Trees,” about Venice, and “Moveable Feast” about Paris, as well as Anthony Quinn in La Strada also were influential. I took the Onassis-Olympia from NYC to Lisbon and then Naples and bought a MotoGuzzi. I remember Harry’s Bar and my proudest moment, since I was very much into “when in rome do as the romans” ~ I had a clothing allowance from the army, when allowed to be a civilian, and I had all my clothes made by local tailors, to dress like an Italian which at that time, you never went into town without a coat and tie. For a passegiata down the corso, everyone was well-dressed no matter how wealthy or poor. So when i was a liaison in Italy, I was speaking Italian, and there for a couple years, and I went into Harry’s Bar before dinner and it was pretty quiet and i asked for a campari and soda and the bartender asked where i was from and i said California and he said, no, you’re Italian and I had to convince him I was American. 1959 to 1962 were “la dolce vita” years. I was invited into society by a friend from Santa Clara University. He was a single man and couldn’t break into society, but together, we were invited into the Veneto society. I had rented a 19th century villa above Vicenza, Colli Berici, above Palladio’s Rotunda. it had a Tiepolo on the master bedroom ceiling. $60 a month; and a cook and cleaner, $9 a month. The draft was on and I was a private in the army, a civilian, and when people ask me if I would do it again, I wouldn’t have changed anything…So my terroir… wherever I’ve lived, it physically had to be in its own sense beautiful and in touch with nature. Whether in Padua, before i found the villa, in NYC, the upper east side, 81st and 1st ~ the German Polish section, i walked to work through Central Park and ate at the zoo. Everywhere i lived ~ Stanford, or even in Paris off the Place de la Contrescarpe, next to the Luxembourg Gardens, was my terroir…” 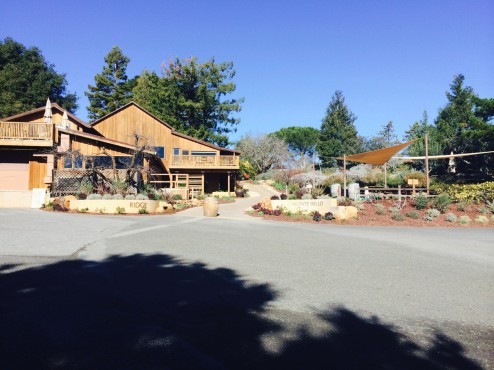 On wine ~ “What nourishes us comes from the earth ~ a natural process. We would have wine at lunch and dinner at 16 yrs old, with my room mate and his family. I was reading Huxley ~ Eyeless in Gaza, about a european experience. Pagnol came later, Bicycle Thief, 1000 Blows, Marcello Mastroianni, 8 1/2, Fellini. There was this love of Italy ~ La Dolce Vita ~ how it informed me! When i lived in the Veneto back then, there were veneto wines. Simple, made by friends of mine. They were bottled, but with no label. But I guess, Piemonte. Paolo Cordero de Montezemolo, La Morra ~ an aristocratic family. i visited him in the early 80s and he gave me the 1978 Dolcetto and Barolo. Also a Barolo, Aldo Conterno who just recently died. Back in the United States ~ a transformative experience? 1936, 1938 La Cuesta. In the mid 70s I drank Inglenook 35, 36, 37, 38, 39, and 3 were glorious. They could match any great Bourdeux. There was this depth and complexity of the 30s in California…These guys didn’t get in the way and look what you got! I thought, they must have a piece of ground that is the finest for this varietal.

On DRINKING the Montebello 1991 (100th anniversary of the first Montebello)….I asked Paul to think about the wine in terms of a song… what it evoked to him, in 1991 when he first drank it and now, as we sit here drinking it ~ “Beethoven’s ODE TO JOY… Schubert, elegant and playful. The beginning of Beethoven’s MAGIC FLUTE, or Bergman’s film of it. But now, it’s a more serious wine ~ Zarathustra, king; when Pamina matures and goes through the fire…

On COLLABORATION at home and at work ~ “As a musician and a writer (my wife) Maureen opens my life out into her world and she enjoys sharing my world with me…What she’s given me is she’s filled our home with music… and with wine makers Eric Baugher and John Olney ~ it’s the people and the quality of what we do. What I did with our whole team was to set a philosophy about what this was all about and with their own addition to that, to believe in what we do. John, Eric and I make all decisions on the wine; like we’re going to add to the 2013 montebello. We all work together, but i bring to it my history and tradition and what i see in the wines, which complements what they see. We’ve been working together 17-19 years, talking and doing assemblage…” 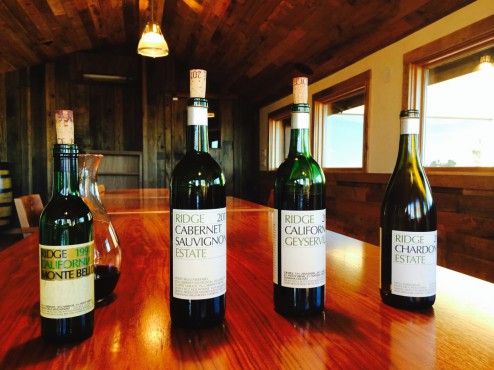 On his “PROUSTIAN MADELEINE” ~ Hiking Wednesday morning, and the smells because of the rain, in oakwood took me back to where i grew up and the oaks there, the wet earth, wet leaves and mushroom smell…. also, where I took you earlier into the cellar where we walked briefly, it reminded me when i carried my daughter Caitlin in a snugly and took her to work. We bought a Peugeot station wagon and went to France when she was 18 months. Because of Alice (Waters) and Kermit (Lynch), we stayed with LuLu Peyroud (of Domaine Tempier), and we would have a glass of rose and Jean-Marie took us down to the cellar and Caitlin was in the snugly and she said “home” because it was like our cellar here. i couldn’t believe it. On MEMORIES OF TASTE ~ “Zinfandel was my other love when i joined Ridge ~ made in 1969, it was an epiphany. Incredible depth of fruit, balance and complexity. And that moment of epiphany was drinking an old Bourdeaux and thinking it’s an old Montebello and seeing the relation (they don’t make wine like that, but we do). Drinking La Tour in the 1970s. I got an education in old Bourdeux that effects my memory.” On RIDGE wines ~ 1972 and 74 Montebello chardonnay. 1999 Lytton Springs. 2012 Geyserville. ON a MEAL ~ Fredy Girardet’s in Switzerland, near Lausanne. A 3 star chef and considered the finest by Allain Chapelle and the Triosgros brothers. On COFFEE ~ Caffe Trieste, 1956, North Beach, espresso. Now, home roasted beans that Cathy does at the winery.

I left Montebello in awe. Of the place, but especially the man himself, Paul Draper. I always wonder where people get their steadfastness of vision. Whether it’s our family whose values come through us, our travels that somehow play themselves out through what we craft with our hands, or our curiosity and the continual risks we take by saying yes. Paul exemplifies all of these to me ~ how he sees himself in his father, how the details of his experiences in Europe and Chile have led him right to where he is on Montebello, and how he continually lives his deeply embedded philosophy of life. His way of living and doing are an inspiration. I left thinking about one of my favorite e.e. cummings quotes, and how difficult it is to continually be (and be satisfied with) who we are:

“To be nobody but yourself in a world which is doing its best,night and day,
to make you everybody else means to fight the hardest battle which any human being can fight;
and never stop fighting.” – ee cummings, 1955